I am pleased to announce I have transferred my Shrine membership to India Shrine in Oklahoma City, Oklahoma. 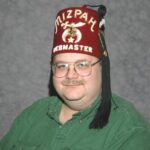 I have been a Shriner since 2002 when I joined Mizpah Shrine in my hometown of Fort Wayne, Indiana.  While a member of Mizpah Shrine I served as the temple’s Webmaster, Editor of the Shrine Magazine “The Allah BI” and as a member of Mizpah’s Public relations committee.  I was also a member of the YOSHI (Young Shriners), the Whitley County Shrine Club and the Antique power club.

in Dallas.  While a member of Hella I was honored to be a charter member of the newly formed Frisco Shrine Club in which I was elected to serve as it’s first Vice President.

Now that I am a noble of India Shrine I hope I can find a useful way to serve Shrinedom and Shriners Hospitals for Children.

WB Bill Hosler was made a Master Mason in 2002 in Three Rivers Lodge #733 in Indiana. He served as Worshipful Master in 2007 and became a member of the internet committee for Indiana's Grand Lodge. Bill is currently a member of Roff Lodge No. 169 in Roff Oklahoma and Lebanon Lodge No. 837 in Frisco,Texas. Bill is also a member of the Valley of Fort Wayne Ancient Accepted Scottish Rite in Indiana. A typical active Freemason, Bill also served as the High Priest of Fort Wayne's Chapter of the York Rite No. 19 and was commander of of the Fort Wayne Commandery No. 4 of the Knight Templar. During all this he also served as the webmaster and magazine editor for the Mizpah Shrine in Fort Wayne Indiana.

Welcome to my page!

Welcome to my homepage! I you enjoy your stay. If enjoy my works and will consider sharing it with your friends and Brethren on your social media.

I also encourage you to follow me on my various social media accounts.

Stay up to date with my speaking events, Masonic news, blog posts and so much more!